Last night we got all dressed up and set out. We had a party to get to and the plan was to trick-or-treat our way there. So we did.
My Tiny Ghost was darn-near irresistible tripping up the walks with his little orange bag over his ghoulish wee arm. 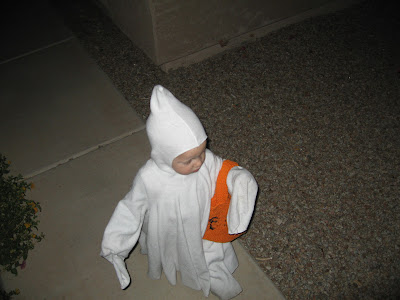 Here’s where the tragedy comes in. Maybe one in five houses had their lights on, of those, half were actually not home and just forgot to turn the light off when they left.
When we arrived at the party, rather earlier than we’d planned on, our children each had 4 pieces of candy.
It was a sad, sad, experience. Luckily our destination was worth achieving, with spooky decor, Halloween cartoons, a rockin’ awesome cake and a Holiday Mr. Potato Head as the prize for best costume, which our own Jane Banks won.
She was so overcome with pride and satisfaction she cried when it was presented to her. (The tears could, possibly have resulted from being over-tired and over-suggared, but lets just stick with pride and satisfaction as the reasons, shall we?)
Here she is recovering from the surge of uncontrollable feelings that came with her win. 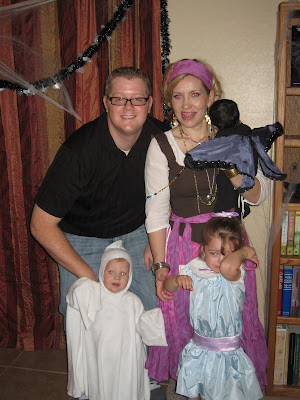 Jane spent her evening on the sofa watching the cartoons. 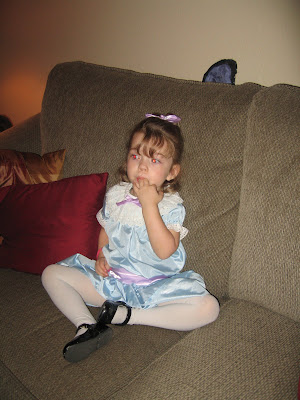 Tiny found the bowl of candy meant for trick-or-treaters and spent the remainder of his time carrying a pack of smarties and a tootsie pop back and forth between his parents, begging help to open them.
The parents, knowing that opening either candy would result in his further pillaging of the trick-or-treat bowl, refused him aid. So, back and forth he went. Sometimes, between parents he would stop and work on it himself. He never did get them open, eventually though, he traded the tootsie pop for a bag of skittles, which he also could not open. 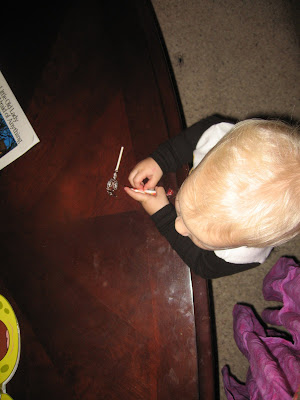 Our New little butterfly spent her evening snuggling in laps. Sometimes with wings, 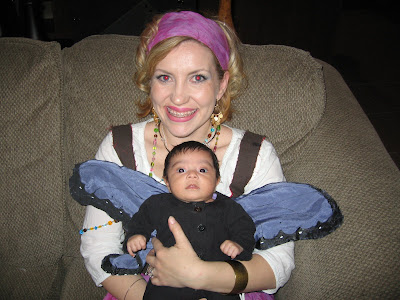 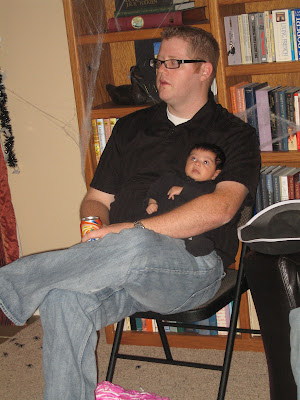 The Mr. sacrificed a black T-shirt that this wee child could have a pair of black jammies with which to wear her wings. That’s love folks.
In case you were wondering, I dressed up as a Gypsy in the costume I made a few years ago, and The Mr went as Alton Brown of Food Network fame. You can’t see it in any of the photos, but he made himself a fork pointer like Alton’s. Also, his dedication to accuracy resulted in the shaving of his goatee.
I’ll make a Halloween lover out of him yet.