See this? It’s one of my best friends. 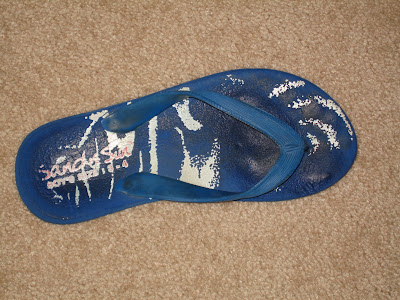 Long long ago my family went on a river trip. I may or may not have been there, last time I ran the Green River was fifteen years ago but that doesn’t fit with what I thought was the age of the beloved flip-flops. Maybe the others went without me ten or twelve years ago?
Anyway, they were going to run the river so they needed river shoes. My marmie stopped last minute at Wal*Mart to find something suitable for my little brothers.
One twin got a pair of those ugly stretchy mesh water shoes but there were no more to be had and so the other twin got the flops.
Lucky for me he didn’t like them.
This generous brother of mine (I’m not sure which one it was though) gave me one of the great gifts of my life when he discarded the unwanted footwear in my direction. I think he mostly just felt grown up about having the same size feet as his big sister, but whatever.
These were my first pair of flops. I hadn’t caught the fever yet. To tell the truth I hardly wore them for the first few years.
It was the summer of 1999 when I realized the true value of flip flops and started collecting pairs in every color.
I was a compulsive matcher you see, so I couldn’t be satisfied with just one pair. I only had the one shirt that matched these though, (I’ll have to show you that shirt some time, I’ve still got it) so they still didn’t get a lot of play.
After a while I started deliberately not matching, trying to shake things up and that is where these earned my love.
They are the most hideous and comfortable flip flops I’ve ever seen or heard tell of.
Every so often I decide it’s time to throw them out but I always make the mistake of putting them on “one last time” and then I can’t do it. They are so perfectly formed to my feet that the mere touch of their rubber to my soles is bliss.
I can’t really wear them out anymore, they’re worn so thin that the comfort disappears on a hard or, God-forbid, rocky surface. Still I like to wear them around the house, and so they stay.
I think the love of a particular pair of flops might be something hereditary that I’ve passed to my son. He loves this pair. 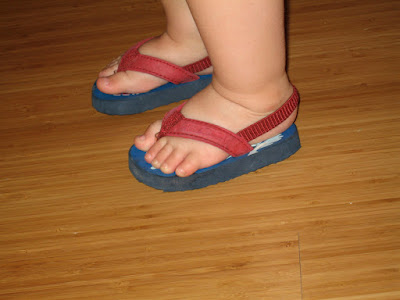 He wears them around as often as possible despite his heels hanging off the back. The pair his sister wore here, 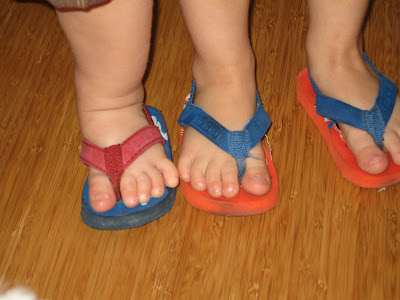 are essentially the same flop in a bigger size but he doesn’t so much care for them. He’ll wear them if need be but he takes them off as soon as were in the car so he has to be re-shod him at every stop.
It’s too bad he found his pair so early in life. I’m afraid his won’t last him fifteen (or is it twelve?) years the way mine have done for me.
Maybe there’s another pair out there for him. A pair in his adult size.
I have to believe this is true.