I’ve been meaning for months and months to make a dress from this tutorial. I’m going to be teaching a little sewing class for some of my friends in a few weeks and the dress from a shirt project seemed just the thing.
I think it’s a perfect first step into the land of sewing for the following reasons.
1-It works up quick, I made it start to finish during nap-time
2-It’s basically just straight seams.
3-The finished product looks way more complicated that it actually is thanks to
the work that was already done for you by the shirt manufacturer.
4-There’s no dadgum pattern getting in the way, being all bossy and confusing. (yeah, I am not a pattern Girl)
I changed a thing or two from the tutorial when I made my dress. Most notably, I added and armseye (or armscye if your spelling it all hoity-toity. either way, the word means arm hole) and I changed up the sleeve from a ruffled strap to a little cap. I liked the cap better with my fabric choice and the other variation I made to the dress. The other variation being the high-low hem line.
As I was cutting out the back piece I noticed that the curve of the shirttail lent a lovely trailing effect to the back of the dress so instead of hacking it off and hemming straight around, I left it and worked the curve into the front of the dress for a bit of drama.
The shirt was one of my favorite’s from The Mr’s wardrobe. His brother bought it a few years back. He took it home and showed it to his wife. Her response was “So, you bought a shirt for you brother?” It would seem she doesn’t care for dragons in men’s apparel.
It’s been hanging in the closet unworn for ages because it’s %100 rayon and is found it’s way into the dryer one time. It still almost fit, but it looked a little funny. It lasted through multiple closet purges because unlike his sister-in-law, The Mr and I both really like the dragons.
As luck would have it, so does Baby Girl! She’s thrilled about her new dragon dress. 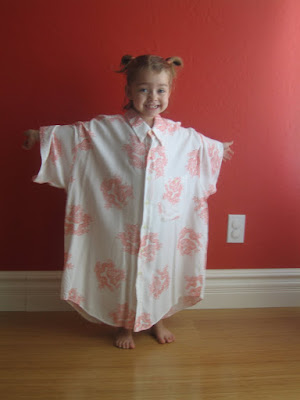 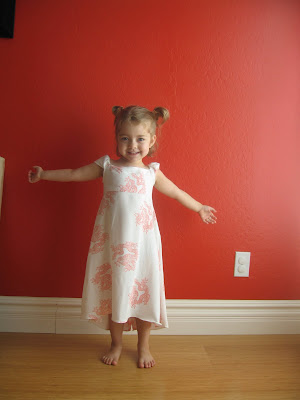