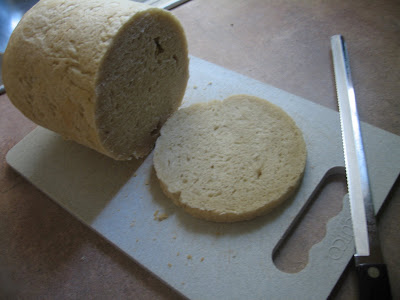 My Grandma made the best bread. I use past tense because she doesn’t make it anymore, not since Grandpa died. She made it for him. She doesn’t see a reason to go to the trouble just for herself.

I made bread on my own for the first time when I was in the neighborhood of ten years old. It just so happened that we went to Grandma’s house a day or two later and we took my bread along.

Grandma was very complementary and served my bread at meals until it was all gone. I was as pround as ten years old can be. I’ll admit though, my bread was flat and heavy and awful and I was dissapointed that we had to eat mine instead of hers.
I always wished I could make bread like hers. Once my mother told me she could make it if she had grandma’s dishes. This assertion gave me new respect for my mother, not that I lacked it before. She couldn’t make the bread with her own dishes because the recipe was along the lines of “fill the yellow bowl so high with such and such and do this thing in that one jar.”

If you ask Grandma for her recipe she’ll tell you you don’t need hers, just find one you like and after a while you’ll learn what works for you and then your bread will be as good. I decided a few years ago, before I moved away, that I was not going to take that answer. I called and asked her for a bread making lesson and when she gave me the standard answer I told her that I knew that, but I still wanted to know how she did it and she gave in.

My sisters and I spent an afternoon with her, watching her work, writing down everything we saw, after she measured things with the particular dish she used we re-measured that ingredient in as close to a standard measurement as we could and in the end we had the closest thing possible to her recipe. We also learned that a good measure of what makes it so darn good is that she kneads it by hand for twenty minutes.

I made some a few days ago. The kneading nearly did me in. I had to switch to using my knuckles instead of the heels of my hands because I was afraid I was going to give myself carpal tunnel syndrome in just the one batch of bread. It is a really stiff dough.

I am pleased to say, that I got pretty close. The flavor I think, is just about right. I’ll need to practice a lot if I’m ever to get my crust as thin and delicate as hers. Grandma bread is about the same texture all the way through with no interruptions from the crust, dense but not heavy, sturdy but not though. Other breads I’ve made tend to be crumbly, not grandma bread. You can cut half inch slices of grandma bread and depend on them tho hold their ground in the face of what ever you choose to spread them with. Butter straight from the fridge? no problem.

The other distingushing feature of Grandma bread is the shape. She bakes hers in old crisco cans because a lot more of those will fit in the oven at one time than regular loaf pans. My mother has been wishing after her own set for the length of my memory. They stared making crisco cans out of cardboard before she thought to collect a set for herself and she’s never found a substitute.

I found a metal jar intended for storing spoons and spatuals and whatnot on the countertop that I use for the purpose. I only have the one though, the rest of my bread is doomed to conventional loaf shape. And you know? It really just doesn’t taste as good that way.

One Response to Grandma Bread