Meryl Streep.
Had a girl’s night out on Friday. I’ll tell you all about that in a minute. The most important thing I want to say is WOW! Meryl Streep!
Of course she’s fabulous. No none can deny that, but watching her in Mama Mia? I have never been so captivated by an actress. Also, that movie made me want to climb on a stage and dance and sing.
It didn’t help that I’ve been listening to Kristen Chenoweth and racking my brain to come up with a forum in which to preform “Taylor the Latte Boy”. It’s time I did some research on community theatre in my area I think.
Anyway, Girls Night out here we go!
We started out at the Cheesecake factory, yumm. This is Melissa‘s Cheesecake. I had key lime myself, divine. 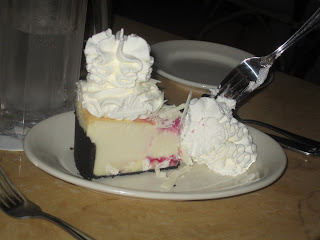 Then it was on to the movies where as you already know we saw Mama Mia and I now, rather than an appreciation for, have a crush on Meryl Streep.
The icing on our girl’s night out cake was the midnight release party for Breaking Dawn at Borders. As you can see, I had a hard time containing myself. 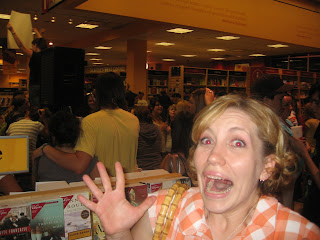 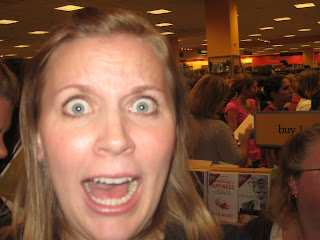 A few of us decided it was necessary to get at least one photo with a superfan. That’s what Midnight release party’s are for after all. Right?
But we were disappointed.
There was a little scrap of a black haired girl wearing Alice’s prom dress who walked right through our little cluster on her way out with her book, but we hesitated, and missed her.
In the end this was the best we could do. The 13 year-old with the wax vampire teeth. The very fact that she’s wearing the teeth whispers to me that she’s not much of a superfan, everybody knows twilight vampires don’t have fangs, but it was the best we could do ok? 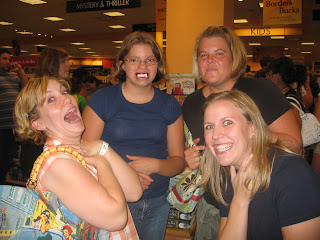 After a while it became apparent that we weren’t getting books at that party anytime soon so we wandered out side and photographed the joy of others more fortunate than ourselves. 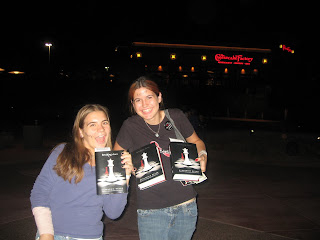 And we tried to make due with being near the book, in spite of the tragedy of not having our own copies to press our loving cheeks to while we whispered words of love on our way to the car. 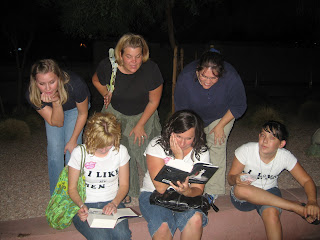 Just as we were, all of us, plunging to the depths of despair someone drove by and yelled from their window “Go to Wal*mart!” so we did ,and guess what!
We were rewarded. 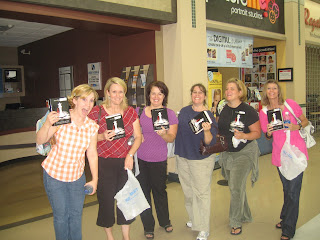 I finished the book on Saturday and was altogether satisfied with the conclusion of the tale.
One more thing. I made a guess before the release of the book about one little aspect of the plot. I told my sister and my bestest friend so I would have witnesses in the case that was somehow right. AND I WAS! I am the coolest!
Sorry Cas, If I just spoiled it for you. I’ll do my best to see that you don’t read this post before you know for yourself how awesome I am.

There you have it.
Meryl Streep? captivating.
Key Lime Cheesecake? blissful.
Wal*Mart? the place to buy sought after books.
Superfans? disappointing.
Breaking Dawn? satisfying.
Me? Awesome!