Last week as we were picking out wrapping paper for the Mr’s birthday presents Baby Girl caught sight of the pinata’s and it was decided, then and there, that her Pop must have one for his birthday. We didn’t buy one though, we made one.
She picked pirate wrapping paper so we stuck with that theme and made a treasure chest pinata. 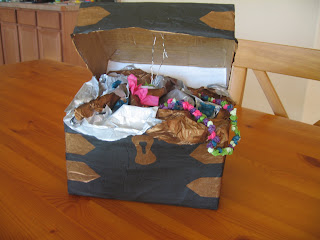 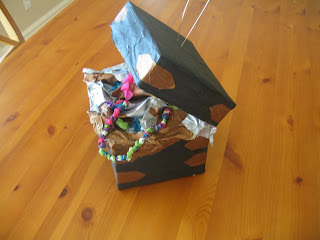 Baby Girl scrunched and strung the paper-wad beads nearly all on her own, I started her off and left her to it.
The Mr helped Tiny Boy have the first turn hitting it. They gave it one good smack inside the open lid, and since I’d planned for hits from the bottom, that pretty much did it. Baby Girl and her cousin each got in one dainty swipe (don’t tell the cousin I called him dainty) and then the biggest cousin finished it off with a well-aimed blow.
Even considering the ease with which it gave up it’s booty I’m quite pleased with my first pinata. I have a sneaking suspicion that there will be many many more in my future.