My Tiny Boy is getting bigger and bigger.
For the past 2 days he’s swaggered around the house like he owned the place, all the while carrying a well loved copy of “Goodnight Moon” in his little man hands.
He happened upon me in the laundry room and relieved me of the task of unloading the dryer. Laughing with delight over each warm article of clothing he deposited in the laundry basket, he then saw to it that the dryer door was closed before running off to find Goodnight Moon and get some toys out. He loves to get toys out. He’s not so much into playing with them but he loves getting them out.
We took his binki away last night. Part of his new found big-boyhood is reaching into his crib to retrieve a bink whenever he takes a fancy. We’ve always limited binki use to bed time, and public situations where quiet needs be maintained. Also, at 14 months it’s time for his binki use to diminish rather than increase so we cut him off.
He did fine last night. He was a bit louder as he drifted off but he slept just fine. Nap time was about the same today.
As I went about my nap-time tasks I mused over whether there’s actually anything wrong with saving the 4 precious “starlight” nuks we have left for the next baby. Then I heard him crying. He’d only been sleeping for 45 minutes so this was odd.
I picked him up and tried to snuggle but he was having none of it. I got him a drink of water, still he cried. I asked him if he’d like to help me with the laundry, there was another batch ready to come out of the dryer, he perked up a bit and stopped crying but when I put him down so he could reach the toasty clothes he cried again.
It went on for quite a while. He didn’t want to snuggle but when I put him down he would flop on the floor and sob. Not like he was hurt or angry, just like he was sad and nothing I did made it any better. It’s been so long since he’s cried without me knowing the reason, it nearly broke my heart and I gave in.
I fetched a binki from my jewelry drawer where I’d stashed them (yes, I love those $18.00 paci’s that much) and gave it to my boy. He relaxed immediately and snuggled right in. He even let me rock him to sleep.
Did it all start because he wanted a binki, or was the binki just the thing that soothed what ever else was bothering him?
Maybe he was mourning with me the loss of his babyhood. 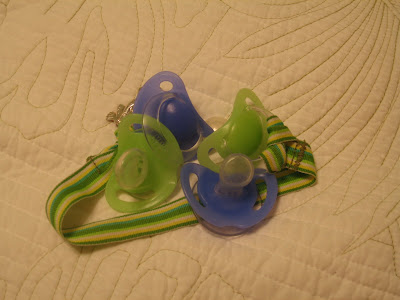