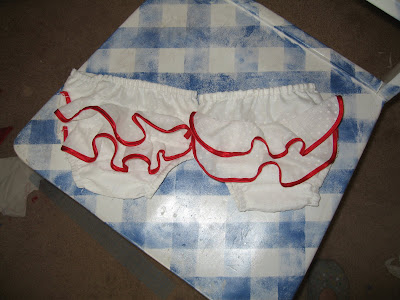 Ruffled diaper covers for baby girl bums I am not including a photo of the baby niece’s dress because I already did in this post. 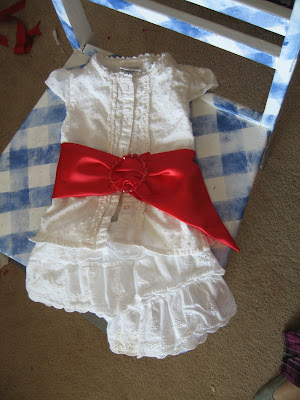 This is Baby Girl’s ensemble. I decided I liked the eyelet skirt better than the stripped dress so all I made for her was the satin belt with the beaded buckle. 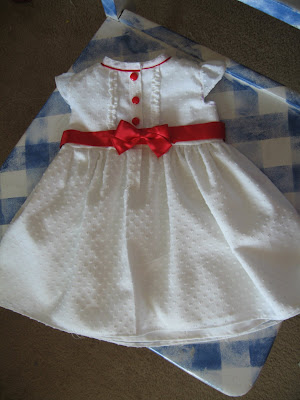 Little Bitty’s dress I made to match the blouse Baby Girl wore. I found a pair of socks with a red and white crochet-beaded edge that someone gave me for baby girl and, miraculously, I had all of the stuff to make a 3 year-old sized pair so both of my girls had beaded socks and sparkly shoes.
Little bitty loved the noise the socks made when she walked, and took big steps to make them louder. 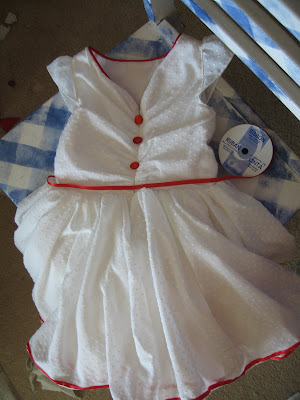 I love how light the skirt looks in this photo. This dress turned out exactly the way I wanted it and I think the child who wore it was happy as well. I meant to ask her if the skirt was fat enough for her but I never did.
She also wanted “puffy boobs” which I did not provide. Don’t let’s misunderstand one another, were it appropriate I could build that girl some pretty impressive “girls” of her own. You don’t work in the costume industry without learning a few tricks. But I thought a busty 4 year-old might steal attention from the bride and that, of course is the last thing you want to do at a wedding so I stayed my hand.
Speaking of things not to do at weddings. They years I spent in a bridal shop has made me a bad wedding guest. I’m so used to telling brides how to fix the oops-es in their wedding attire, I can’t keep my mouth shut. In the shop it was my job to tell them every little thing I noticed so it could be fixed and perfect on the day. Once the day arrives however, brides don’t need to be worried about little things that only a trained eye will notice.
Example number one. I am standing outside the temple in a crown of people waiting for the bride and groom to come out for photos. Another bride came out while we were waiting and from across the crowd I see her husband pick up her train and slip his wrist through the loop intended for a hanger and nothing else, ever! People make this mistake all of the time, a bride takes a dress into the fitting room, sees the loop and exclaims “Look! it has a loop so I can hook it to my wrist while I dance!” “NO” a responsible bridal sales representative should say. “That loop is only for hanging the dress on a hanger! You see how it is in the middle of the underside of the train? If you put that thing on your wrist all anyone is going to see is your crinoline, and the lining of your skirt and that ain’t pretty!” Nobody told this girl, apparently. Anyway, back to the story. I’m across a crowd of people and I see this groom fumbling with the train and the hanger loop. “NO! HONEY” I shout, “That is NOT what that’s for!” She of course didn’t hear me over the crowd and it’s probably for the best. My sister who was on that brides side of the crowd, noticed as well and helped the groom arrange the skirt so, at least, the lining looked it’s best when it was chosen, over the actual pretty part of the dress to be shown to the world.
The second incident on the wedding day was with my brother’s own bride. while standing behind her in a photo I noticed that her veil was up-side down. Anyone who plans on doing bridal hair-dos really should learn how to properly put in a veil comb because this is another very common mistake. The comb should be pushed down toward the neck, not up toward the hairline. This way the tulle falls beautifully over the comb and none of the stitching can be seen. It is really not hard.
So anyway, I notice the up-side-down veil and instead of keeping my mouth shut like I should out pop the words “sweetie, your veil’s up-side-down”, one always has to use some term of endearment when talking to a bride about her wardrobe fumbles, honey, sweetie, sugar lump, you get the idea. Now, what I ask you was she supposed to do about it at this point? Take the thig off right then and there, risking the ruination of her up-do inorder to fix a little something only I noticed? I realized the unhelpfulness of telling her immediately and assured her that I could only tell because I know better and because I was right behind her head. I don’t think she stressed out about it, I hope she didn’t anyway. Still, I should have kept it to myself.
Maybe one of these days I’ll write a tutorial on how to properly don a wedding veil in a effort to educate the world and stop the showing of stitching on the heads of brides everywhere and in so doing cure my bridal-wear advice blurting disorder.