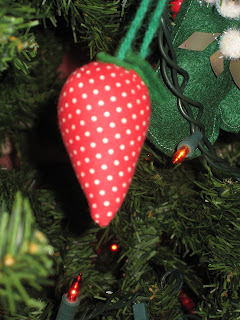 I hate the bell ringers. I hate them! I would be happy to give spare change to the Salvation Army if only they would not insist upon harassing me with bells every time I enter the grocery store throughout December.
I told myself that I would put money in if ever I saw a bucket without an immigrant violently ringing a bell at me as I passed.
Today at Wal*Mart it happened. The ringer was standing off to the side of the entrance talking on the phone, not ringing. So I got out some change for Baby Girl to put in the bucket. The man rang his bell in appreciation.
I think such a ring, a ring of gratitude is perfectly acceptable. It did not make me feel harassed or guilty about my unwillingness to donate. It delighted my child and made me grateful that for once in my life I arrived at the store while the ringer was on break.

My grandma made each of us an ornament every year. The strawberry ornament has always been a favorite of mine. It has been with me for many a Christmas. I think I got that one the year I was four.
It was prettier in it’s prime. Now the felt leaves are worn down to green nubs and the berry it’s self has perhaps been squished a time too many.
My sister and I were always confused as to which berry was who’s and would fight over them until the rightful owner of each was decided. I don’t recall what the difference was or even if the same one was the preffered every year, but squabble we did, until our mother got separate boxes for each of us to store our ornaments in.