We were sitting in the back at church today. Near by, a man was standing with his baby.
After some rocking and bouncing on the part of the father the baby went to sleep. “Shhh!” said Baby Girl. She kept saying it every time I looked at her. Sometimes she’d tap me just so I’d look over and she could shh me. This continued until the man haded the baby to his wife.
Toward the end of the meeting, the shhhing started up again. The man was still standing by the wall a little way off, but now he was holding a squirmy toddler who was not, and had no intention of sleeping.
I was a bit perplexed, but after a moment I noticed the gentleman sitting in the row in front of us was dozing.

I think he’d be glad to know the small 3 year old girl behind him was taking such great care to insure that her mother was respectful of his nap time. 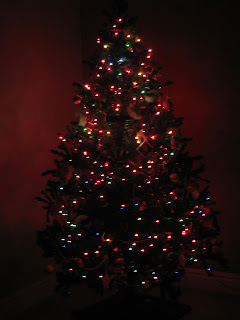 Here’s the tree, It’s really not quite finished. I’ve never decided what I would like for a tree skirt so the ugly metal stand and the yoga mat I put under it to keep it from scratching the floor are contributing their beauty to the scene. I usually just put some presents under there quick like to hide that stuff. The Dog took to humping the gifts last year though, so I’m not too eager to put any within his reach.
I also don’t have a star for the top. I might make one one of these days. 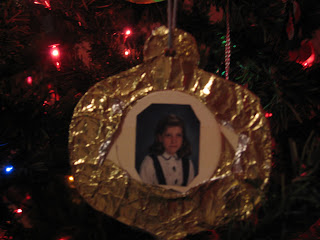 And of course this is the gold foil number I made in fifth grade, hung with a bit of blue string. My mother had a big spool of blue string. I grew up thinking blue was the normal color for string. Does string even come in other colors?