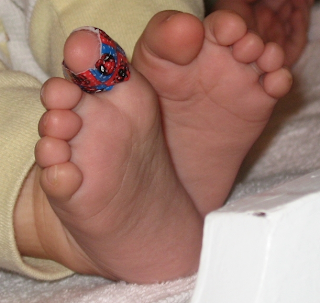 We took the children to the doctor today. Baby Girl had her 3 year check-up and Tiny Boy had his 9 month.
There were a few moments in the conversation with the Doctor that were especially rewarding. The shining moment was when she asked if Baby Girl “had any interest in potty training yet” and I was able to answer that she’s been potty trained for over a year now.
The other satisfying bits were little things that she mentioned that we already do like not giving lots of juice and switching to skim milk after the age of 2. It’s just nice to hear that something you do anyway is considered to be “right”
Tiny Boy was tested for anemia. The itty bitty Spider Man band-aid on his itty bitty toe is so very adorable.
Both kids also got flu shots. I’ve never made up my mind about immunizations so we get them and as long as were getting them we might as well get the flu shots too.
Baby Girl didn’t even cry. I was waiting for the scream, then the husband (who was home today because he was not laid off) said “it’s all done!” and there was the girl happy as can be with a band-aid on her little arm.
Tiny only whimpered and squirmed a little for the anemia test but he did wail pretty good for the shot.
Another thing about today, nobody peed on anything that should not be peed on. Diapers and toilets only today folks!