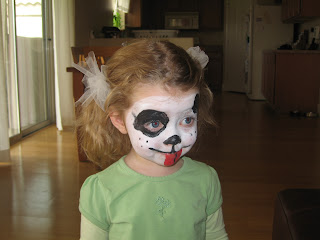 I finished nearly everything on my list.
I also painted my room and may have sold my house.
My list was in preparation for the open house we had today. I will have to post a photo of the 40 foot sign on my back fence. No, I am not exaggerating. It really is a 40 foot sign.
We honestly didn’t expect anyone to come to the open house since the market has been so slow, but the area realtors were combining their efforts to get things moving in the neighborhood and planned this neighborhood wide open house. 30-ish of the 105 properties that are on the market in these parts participated. We thought this was the time to do it if it was going to be done, so we joined in. We figured even if no one came, at least we’d get the house clean.
So we worked all week. My agent came over Wednesday Thursday and Friday and taught me to color-wash (that’s actually what I did in my room) and helped me get things whipped into shape. It turns out it was worth it.
There was a guy peddling windshields in the neighborhood and he decided to stop and look. He said he wanted the house he just needed to consult with his parter and he’ll call us in the next few days. We happen to need 2 new windshields so he will be calling, if he does not want the house we won’t be left wondering.
We never made it out to look at the other houses so I’m not positive but I’m pretty sure we had the best stuff going on at our house. There was of course the 40 foot sign mentioned previously. We also had face painting, snacks and ice cream to give away. Mr. Windshield had some crackers and a Diet Coke. I’m almost positive that’s what sold him on the house. Nobody with kids came, but Lily and our agent’s kids got their faces painted and they were super cute.
Our agent is a friend of ours. She’s pretty much the coolest, whipping out 40 foot signs, painting faces and bedrooms and the like. She’s a girl who gets things done. I’m glad she’s on my team.
In other news, We had our adoption interviews yesterday. We are still waiting for another thing or 2 and then we’ll be ready to start getting kids.
Also, Tiny Boy figured out how to zerbit. Now when I am holding him, instead of leaning his little chin on my shoulder-neck area he leans his wide open mouth on me and zerbits. Right now it is really cute. I’ll be interested to see how long it takes for it to get annoying. Really though, if you’ve never had a zerbit from a 6 month old you have never lived.
All in all it’s been a pretty intense week.